About Books Blog 5: The Secret Life of Bees 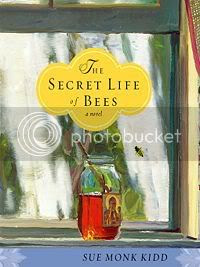 Most this summary is from wikipedia. I'm just giving credit where credit is due.

Set in South Carolina in 1964, The Secret Life of Bees tells the story of Lily Owens, whose life is shaped by her blurred memory of the afternoon of her mother's accidental death. When Lily's black "stand-in mother," Rosaleen, insults three racists in town, they escape to Tiburon, South Carolina, a town that holds the secret to Lily's mother's past. She is taken in by May, June, and August, an eccentric trio of black beekeeping sisters. Lily is there after introduced to their mesmerizing world of bees and honey, and forced to confront her own dark past to learn what it means to be a family.


What I Thought Of This Book

There is so much that I liked about the book that I actually had a hard time thinking of what to say in this section. I did come up what some things eventually. Go me! I am going to break from my normal writing set up, and just give you a numbered list of things I liked about the novel.

1. The main thing I enjoyed about the book was the authors writing style. The story is written from Lily's point of view. The voice that Sue Monk Kidd gave her lead character was oddly comforting to the mind, considering the fact that Lily is under emotional distress during most of the story.

2. The book is full of endearing characters. I especially love the strong female leads. They are the kind of characters you wish were real so you could hug them silly.

3. I really did learn a thing or two about beekeeping. It was fun because that is not really something I would go try to find out about by myself. I loved how the author tried to apply the life of bees to things going on the Lily's life.

The novel itself is full of interesting facts. At the beginning of every chapter, a fact from a book about bees is quoted. I found that the best way to find out cool facts about the novel is to read the reading guide at the end of the book. It's packed with shiny in depth facts about things that inspired the author.

I went to see this movie literally three hours after finishing the book. It was a little surreal seeing the book acted out to soon after I had finished it. The film follows the novel closely. Very little of the actually story was changed. I always give kudos to movies that use actual lines of dialogue from the book, which they did quite often.

The talented cast was wonderful. I felt that they looked and acted their parts very well. Over all I was truly satisfied with the film. It made me cry like a baby. Of course, I've found that I get emotional about films and television lately. I mean I almost started to tear up during High School Musical 3 for goodness sake. So pathetic but true.

The Secret Life of Bees Trailer

Music to Read By

My favorite album for this novel was of course The Beekeeper by Tori Amos. I'm not just saying that because of the irony in the title of the album. I say this because I really did enjoy listening to this while reading the book. The themes of some of the songs on the album share themes that are expressed in the book.

I also loved listening to The Hours soundtrack, The Virgin Suicides Soundtrack, and the Across the Universe Soundtrack.

A Whisper - Coldplay
I'm Going To Bake A Cake - Phillip Glass
Ceiling Wax - Chairlift
Stop and Stare - OneRepublic
Afternoon Sister - Air
The Beekeeper - Tori Amos
Flight of The Bumble Bee - Nikolai Rimsky-Korsakov
Ave Maria - Celine Dion
Into The Fire - Sarah McLachlan
Slow like Honey - Fiona Apple
Somewhere I Belong - Linkin' Park
Why Does Someone Have To Die? - Phillip Glass
Cemetery Party - Air
Let it Be - Carol Woods and Timothy T. Mitchum
Choosing Life - Phillip Glass
Say - John Mayer
Hurt - Christina Aguilera
Colorblind - Counting Crows
You've Got A Friend - Carol King
Unforgettable - Nat King Cole
(Note: The remade version with Natalie Cole singing on the track is good as well. That is the version on the playlist below. I think I prefer the original however. This song is said to be playing on the radio near the end of the book.)
Stand by Me - Ben E. King
Life in Technicolor - Coldplay


This is Jazz R.J. signing off. Hugs.

Next About Books Blog: Twilight by Stephenie Meyer
Posted by Jazz R.J. at 12:01 PM

LOVE LOVE LOVE this book!
I seriously felt the honey on my lips and the sweat running down my back while reading this book. It was poetic! So good!!!