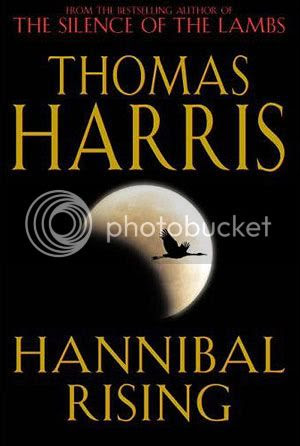 "Hannibal had entered his heart's long winter. He slept soundly, and was not visited by dreams as humans are."

I'm using the one on the back of the book. I just don't think I could summarize this one well.

Hannibal Lecter emerges from the nightmare of the Eastern Front, a boy in the snow, mute, with a chain around his neck. He seems utterly alone, but he has brought with his demons with him.

Hannibal's uncle, a noted painter, finds him in a Soviet orphanage and brings him to France, where Hannibal will live with his uncle's beautiful and exotic wife, Lady Murasaki.

Lady Murasaki helps Hannibal to heal. With her help he flourishes, becoming the youngest person ever admitted to medical school in France.

But Hannibal's demons visit him and torment him. When he is old enough, he visits them in turn.

He discovers he has gifts beyond the academic, and in the epiphany, Hannibal Lecter becomes death's prodigy.

I know what you're thinking. The girl who in her last review complained about the amount of cursing, decides that the next book she should read is Hannibal Rising. A book about the early years of Hannibal Lecter, a psychopathic, cannibalistic, serial killer. What can I say. I'm random that way.

As much as I had wanted to read this book, I wanted to avoid it. That fact is, you have to be in the mood to read about the lives of fictional serial killers. Most of my concern came from glimpses of Hannibal's early life supplied by Thomas Harris' novel Hannibal. I knew from reading Hannibal, that Lecter's younger sister, Misha, met with an extremely unfortunate death. I was not particularly anxious to read about Misha's death, or any descriptions of cannibalism. You'll be glad to know that neither of these things are graphically described. All things referring to cannibalism are only implied. Thank goodness for that.

Your probably wondering why I even read the novel if I was so wary of it. Well, the answer is Thomas Harris. I love Thomas Harris' writing style, and have read almost all of his books. He has a way of describing thoughts, emotions, and small details that amaze me by being both simple yet complex. He comes up with interesting character quirks, and his books always have exciting action sequences.

Even though I knew I would like the writing style, I was surprised at how much I truly enjoyed the book. I don't know what I really expected the novel to be, but I didn't think it was going to be such a great revenge thriller. I really got wrapped up the journey Hannibal takes to exact revenge on his sister's murders. I don't condone revenge in real life, but it is a exciting story element for fictional people.

I think another reason why it appealed to me, was because I find what makes serial killers tick a subject of interest. I'm totally into psychological profiler and true crime shows. I've aways considered Hannibal Lector a rather interesting character. Thus, I found it intriguing how Harris explained the way his mind worked.
The author also was actually able to make you almost feel for Hannibal and root for him. I know that sounds weird, but is a little sad. I mean eight year old Hannibal Lecter was a child prodigy, who loved his little sister, and loved animals. He could have grown up to be a fairly decent Lithuanian Count if not for his unfortunate childhood trauma. If you've read many of these types of stories you'll know, that super genius plus psychological trauma equals well... rather unpleasant things. The dude still deserves to be punished, (which never seems to actually happen in any of the books), but a least you know he wasn't born an evil psychopath.
Overall, It's a great book if you like suspense with murder and mayhem. If you don't like that type of thing, or are squeamish, I'd say it's probably a good idea to stay away from it.

You know what I'm going to link you to Wikipedia. The facts I found interesting, don't really make much since if you haven't read any of the previous books involving Hannibal Lector.

I haven't seen the movie yet. I had the opportunity to once, but choose not to watch it. As I said before, you have to be in the mood for that sort of thing, and I wasn't that day. Plus, I really wanted to read the book first. I'm sure I'll see it eventually. The from the trailer I can gather that movie seems very close to the book. This may be, because the book was allegedly written, only so it could be a base line for the film. The acting, and cinematography seem very well done in the trailer. I read some reviews on IMDb, and many of them spoke well of the film. That's all I can say about it since I haven't actually seen it for myself.

I loved, loved, loved Origin of Symmetry by Muse. Something about the instrumentation fit the mood of the story. I can't explain it. The title of the album also seem to fit in a way. Since Hannibal has a genius caliber mind, the book often refers to mathematics. I think there is also a quote in the book somewhere referring to symmetry.

Yay! Another review finally. I apparently the holidays and going back to work, threw me off of my update plans. I've had this review on my computer for weeks now. Thank you for your patience with my incredible procrastination.
Next About Books Blog: Prom by Laurie Halse Anderson

Awesome post! You definitely have a point: you have to be in the mood to read about serial killers. I'm planning on reading this one eventually, but probably not any time soon. Thanks for the review! :)

Great review. I have always avoided these books though I am not sure why. I don't have a problem with serial killer books at all. They just never interested me. I think you may have changed my mind though. I'll let you know what I think of the book when I get around to reading it. Keep the great posts coming!