About Books Blog 3: The Host 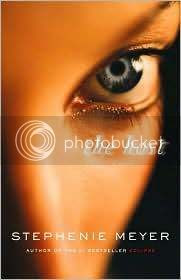 Okay I usually try to summarize the story in a sentence or two. However, I find this book impossible to summarize in a sentence. Therefore, I am totally going to copy and paste the actual summary from the book below.

Our world has been invaded by an unseen enemy. Humans become hosts for these invaders, their minds taken over while their bodies remain intact and continue their lives apparently unchanged. Most of humanity has succumbed.

When Melanie, one of the few remaining "wild" humans is captured, she is certain it is her end. Wanderer, the invading "soul" who has been given Melanie's body, was warned about the challenges of living inside a human: the overwhelming emotions, the glut of senses, the too vivid memories. But there was one difficulty Wanderer didn't expect: the former tenant of her body refusing to relinquish possession of her mind.

Wanderer probes Melanie's thoughts, hoping to discover the whereabouts of the remaining human resistance. Instead, Melanie fills Wanderer's mind with visions of the man Melanie loves—Jared, a human who still lives in hiding. Unable to separate herself from her body's desires, Wanderer begins to yearn for a man she has been tasked with exposing. When outside forces make Wanderer and Melanie unwilling allies, they set off on a dangerous and uncertain search for the man they both love.

Wow that was three paragraphs long. Now you see why I try to summarize in a sentence.

The Host is Stephenie Meyer's first novel classified as an adult novel. Meyer is most well known for her young adult book series about vampires Twilight. While you won't find any vampires in this novel, you will find the coolest body-snatching aliens. The Souls, as they are called in the novel, will surprise you with the personalities. Souls are rather kind, but like humans, there is an occasional bad apple in the bunch.

I'm a huge fan of the science fiction genre, but I think even if you don't enjoy sci-fi at all you will still enjoy this novel. Stephenie Meyer has blended classic science fiction themes with romance and action to create something unique.

I just can't tell you how much I adored this novel. It made me laugh. It made me cry about three times. I think loved it more than the Twilight Novels, which believe me is saying something. I read all six hundred plus pages of The Host in two days. Ha-ha. Yes, the book was that good.

While there were some things I did find interesting. They are all facts that I think everyone will find a great deal more interesting once they've read the book. Hence, I am giving you a link to The Host on Wikipedia so you can discover the facts for yourself once you've read the book.

The Host (Novel) On Wikipedia

There is no movie of this book as of yet. Truthfully, I don't know how you would make this into a film. Since Melanie and Wanderer share the same body, they often hold conversations in their mind. I'm not sure how you could make that happen on screen without it being silly. However, if someone did figure out how to make it work that would be awesome.

Favorite Albums For The Host

I love Black Holes and Revelations and Absolution by Muse for this novel. Stephenie Meyer and I share a love of this band and their music just works with all her books. Other favorite albums include Hybrid Theory by Linkin' Park, Speak For Yourself by Imogen Heap, Hopes and Fears by Keane, and Finally Woken by Jem.

Before I give you my personal playlist for the book I thought I'd let you know that Stephenie has her own playlist for The Host on her website.

Now on to my playlist...

Earth Invasion - Skillet
Body Snatcher - Billy Idol
Invasion - Eisely
They - Jem
Papercut - Linkin' Park
The Seeker - The Who
(Note: This was chosen completely for the title though some of the lyrics do match up. When you read the book, it will make since.)
Walking After You - The Foo Fighters
(Note: Strangely enough, this song is on the 1998 X Files Movie soundtrack. The Host and X files contain aliens. That just amuses me.)
Stromata - Charlotte Martin
(Note: I originally picked this because the music video made me think of the book. Then I looked up the lyrics and the word stromata. That kind of worked with the story too.)
Hopeless - KT Tunstall
Hide and Seek - Imogen Heap
Just Like You - Three Days Grace
Stockholm Syndrome - Muse
Human Behavior - Bjork
Do No Wrong - Thirteen Senses
How Does It Feel - Avirl Lavigne
Try - Nelly Furtado
My Body Is A Cage - Arcade Fire
Map Of The Problematique - Muse
Soul Meets Body - Death Cab For Cutie
Sunshine - Keane
Original of the Species - U2