About Books Blog 11: Gone with the Wind 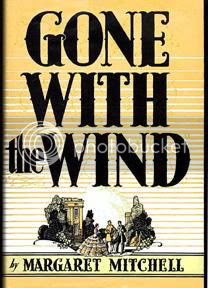 "Take my handkerchief Scarlett. Never, at any crisis in your life, have I known you to have a handkerchief."

The high climbs and pit falls of southern bell, Scarlett O' Hara, during the American Civil War and Reconstruction.

I find great amusement in imagining someone picking up this book, observing that it contains one thousand thirty eight pages, and setting it back down in fear. Do not be intimidated by the number of pages included in Gone with the Wind. They are the most entertaining one thousand thirty eight pages you will ever read. At least I found them profoundly entertaining any way.

One thing I enjoyed most about the novel is the historical aspect of it. It was interesting to see the viewpoints of the past. It made me see why things are the way they are today.

I loved how realistic the characters where written. Margaret Mitchell wrote in all the characters' good attributes as well as their flaws. The characters became so real to me that I found myself scolding them, cheering them on, and often feeling the need to give them a good smack to the head. Pathetic I know, but I am not delusional I swear. I do know that Scarlett, Rhett, Melanie, and Ashley are not real people. Still, I was almost sad that the book ended. I felt so attached to the characters; I wanted the mother and guide them. Though in some ways, I was glad the book ended, because few couples in literature know how to put each other through turmoil like Rhett Butler and Scarlet O' Hara.

I only have one issue with the book. I hate when authors write dialogue in dialect. I can never understand what the heck the characters are trying to say when this is done. It drives me nuts!

1. It took Margaret Mitchell ten years to complete the novel.

2. The book was nearly titled after its final line, “Tomorrow is another day.” The publishers observed that there were many other books with similar titles, and asked for a new name. "Gone with the Wind" was chosen. The title is taken from Ernest Dowson's poem Non Sum Qualis Eram Bonae sub Regno Cynre. The title is also used in part three of the novel.

3. Margaret Mitchell refused to write a sequel, but her estate authorized Alexandra Ripley to write a sequel entitled Scarlett. In 2007 Donald McCaig was authorized to write Rhett Butler's People. A novel that follows events of Rhett's life before, during, and after the events in Gone with the Wind. I have not read either of these books. However, I have seen the mini series film of Scarlett.

I have not seen the film in some time. Thus, I am unsure of how good this review will be. I tried to get my hands on movie so I could refresh my mind, but I couldn't find it. I suppose that I will have to order the DVD online. There is going to be a 70th anniversary collector’s addition of Gone with the Wind coming out in November. I'm thinking this is going to be my late birthday present.

On to talking about the movie itself. From what I remember, it is a beautiful film. The film was very true to the book in terms of the events. From what I've gathered through watching videos on YouTube, it seems that they used many of my favorite lines of dialogue from the book in the movie. I think it was marvelously casted. I'm sure there are a few melodramatic moments, but it was made in 1939. Almost all older movies are like that. It is the way it should be. Moreover, the characters in Gone With The Wind are ridiculously melodramatic, so it works.

I believe, the only significant change from the novel, is that Scarlett's children from her first and second marriages, Wade and Ella, were cut from the film. This doesn't bother me. Firstly, because Wade and Ella are not as elemental to the story as Scarlett and Rhett’s daughter Bonnie. Secondly, Scarlett is ... well ... not the greatest mother in the world. Selfishness gets you absolutely no where with children.

Hey, I think this movie review didn't turn out too bad, considering I haven't seen it since I was around the age of fourteen.

The 1939 trailer basically shows you nothing of what is in the movie. Thus, I decided that I would also include a editing exercise trailer edited by Beatrice Corti. Her YouTube profile says that she is a professional editor, so it is just as good as a real film trailer. It should give you a much better idea of what that film is actually like.

Gone with the Wind - Original 1939 Trailer

Gone with the Wind Trailer by Beatrice Corti

I listened to a great deal of music while reading Gone with the Wind. These were my top two favorite albums: 19 by Adele, and Cradlesong by Rob Thomas. Several songs on these albums made me think of the story. I loved listening to every album by Alison Krauss and Nickel Creek. I also discovered that many songs by the band Garbage work well with the novel too.
I want to mention, that I probably would have enjoyed listening to, Dreaming Out Loud by One Republic and Extraordinary Machine by Fiona Apple. Somehow, I never got around to listening to them. Oh well, maybe I'll get a chance if I read the book again.

Gone With The Wind Playlist

I Will Possess Your Heart - Death Cab For Cutie
The Best For Last - Adele
Stupid Girl - Garbage
Oh Atlanta - Alison Krauss & Union Station
Scotch and Chocolate - Nickel Creek
Soldier's Poem - Muse
Scarlet Tide - Alison Krauss
Sally's Song - Fiona Apple
Fire On The Mountain - Rob Thomas
Army Of Me - Bjork
(Note: A little song to express my dislike for Scarlett's sister Suellen.)
First and Last Waltz - Nickel Creek
Borderline - Alison Krauss
Scarlet's Walk - Tori Amos
Money Money Money - ABBA
Extraordinary Machine - Fiona Apple
When You Were Young - The Killers
She's Always A Woman - Billy Joel
Beautiful Mess - Jason Mraz
Make You Feel My Love - Adele
I Can't Make You Love Me - Bonnie Raitt
This Woman's Work - Kate Bush
Running Up That Hill - Placebo
You Give Love A Bad Name - Bon Jovi
Battlefield - Jordan Sparks
Cold As You - Taylor Swift
More Like Her - Miranda Lambert
(Note: I don't know if this was done on purpose, but this song describes the relationship between Scarlett, Ashley, and Melanie perfectly.)
Don't Stop - Emmy Rossum
Someone To Save You - One Republic
Gasoline - Rob Thomas
Apologize - One Republic
Don't Give A Damn - Chairlift
(Note: I know this song contains a semi curse word, but if you know the book or the movie at all, you know I couldn't resist.)
What'll I Do - Alison Krauss


See you all later. Sorry it took me so long to get this out, but it took forever for me to organize the book playlist. I'm still not sure I'm satisfied with it. Oh well. Hugs!

Next About Books Blog: Sundays At Tiffany's by James Patterson and Gabrielle Charbonnet
Posted by Jazz R.J. at 11:00 PM

Loved the movie...never did read the book though.

Lol never read the book, but I did see the movie years ago...maybe I should refresh my memory. Great review! :)

I had to watch the movie in French...ha ha ha. I never did read the book. I love you Music to Read by section. Great blog, I'm now following. ParaJunkee

Its one of those books you kinda feel like you have to read at some point in your life.You know, those enduring classics :). Although I must admit nowdays everytime anyone mentions gone with the wind all I can think about is will scarlett ohara from robin hood men in tights. Terrible, itsn't it lol