About Books Blog 12: Sundays At Tiffany's 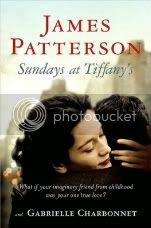 Genre: Romance
(I guess it has a fantasy element as well, but it's mostly a romance.)

"Men suck! Even imaginary ones."

(I apologize to you men out there, but it really was my favorite line. I still love you guys.)

I was going to summarize this one myself, but summary featured on Wikipedia was just to cute to resist.

Jane was a sweet, funny, chubby child, desperately seeking love from her self-obsessed mother, and a father who was wrapped up in a new life with his beautiful young girlfriend. Jane's only friend was handsome, funny, thirty-something Michael. He was different; no one else could see him, or believe he existed beyond the realms of Jane's very creative imagination. The pair would talk from morning until night. As Jane grew older, though, the time came for Michael to leave Jane's side.


But Jane can't forget him. More than twenty years after Michael said goodbye, Jane catches a glimpse of that unforgotten face, her heart pounding she can't believe it is true - could it really be Michael? This time Michael isn't just a fragment of her imagination. But will the path of true love be a smooth one? And will Jane get a happily ever after?

I was initially drawn to this novel because of the tag line featured on the front of the book. "What if your imaginary friend from childhood was your one true love?" I was curious about how they would make that work. Another thing that drew me to it was the fact that James Patterson was one of the writers. I had read a few of his Alex Cross novels and loved them. I wanted to see what he did with the romance genre.

I don't believe that I have ever read a collaborative work of fiction before this book. I thought it might be fun to see what occurs when two authors decide to write one novel. It was indeed fun, though I did think it caused the book to have a few "random moments." If you don't know what a "random moment" is ... well ... I can only define them as moments in the story where you say: "Huh, didn't see that event coming. I'm not sure if this event is a little off track or not." If you still don't don't understand what a "random moment" is, after my less than wonderful description, then I suppose you'll just have to read the book to see for yourself.

I wouldn't say that Sundays At Tiffany's is what your going for if you want to read deep and meaningful literature. It reads a bit like one of those little television romances that you watch on the weekend. It's light, humorous, and full of cute pop culture references. It doesn't make you think too hard, yet it is a sweet little page turner. It's not one of my super favorites, but I will probably read it again in a few years just for fun.

James Patterson was partly inspired to write the novel when his son at the age of four said these words: "Love means you can never be apart." Thus, came a story about believing there is nothing better than giving a receiving love.

There's no movie yet. I think it would make an adorable film though. As I said it is like a TV movie when you read it. It is something could see featured on Lifetime or Hallmark Channel.

I loved Into The Rush by Aly & AJ, Finally Woken by Jem, Fearless by Taylor Swift, Pocketful Of Sunshine by Natasha Bedingfield, and David Archuleta's self titled album. I felt that the lyrics and mood of many of the songs on these albums tended to fit the story perfectly.

Corinne Bailey Rae's self titled album and Once Again by John Legend, are two albums that are specifically mentioned in the novel. I did not listen to this music while reading the book, but I was inspired to listen to them after I finished reading. I discovered that I really liked these two musicians that I had never really listened to before. Who would have thought that you could be introduced to new music by reading a book.

Thank Heaven For Little Girls - Maurice Chevailier
(Note: This song is featured in the musical Gigi. The musical is referenced a couple times in the novel. Jane's father gives her a stuffed dog named "Gigi" on her ninth birthday. Also, the play that Jane produces as an adult is titled "Thank Heaven.")
Do You Believe In Magic - The Lovin' Spoonful
Slow Me Down - Emmy Rossum
Soulmate - Natasha Bedingfield
You're Not Sorry - Taylor Swift
Precious Illusions - Alanis Morissette
Save Me - Jem
In A Second - Aly & AJ
You Can - David Archuleta
Save Room - John Legend
This Kiss - Faith Hill
Speak For Myself - Aly & AJ
Pocketful Of Sunshine - Natasha Bedingfield
I Love You - Martina McBride
Enchantment - Corinne Bailey Rae
Green Eyes - Coldplay
(Note: Micheal is described as having green eyes, so this song is perfect.)
Lucky - Jason Mraz and Collbie Calliat
Protecting Me - Aly & AJ
Running - David Archuleta
Just A Ride - Jem
Halo - Beyonce
Thank Heaven For Little Girls - Jack Jones

That's all folks. I want to thank all my new followers for following the blog. Kisses and Hugs!
Next About Books Blog: A Company of Swans by Eva Ibbotson
Posted by Jazz R.J. at 8:55 PM

It seems a bit strange you know...and it has nothing what so ever to do with breakfast at tiffany's does it (you and I both know that is why you picked it up lol)

Hey! I just wanted to let you know I just sent a blog award your way! I love your blog and the play lists that go along with them! Cheers!

Hi! Just finished reading the book a couple of weeks ago, & I love it! True though about those random moments, kindda bump into 'em once in a while in pages, but overall, lightens up your read with a cute ending... ;)